I travelled to Berlin early November. It has been on my must-visit list for a while, its decisive history being one of the appealing aspects of the city. Next to that I really wanted to check why everyone is so excited about Berlin, calling it Europe’s hippest and most trendy place to hang out. However much I realize ‘hip’ is ultimately undefinable, I really wanted to go and see for myself.

I travelled by car as all cheap plane tickets were gone by the time I finally booked a hotel. Despite the heavy construction work the trip was not too bad, I took the fast lane on the A2 motorway which took me right into the city center. My hotel was located in Friedrichstrasse, Berlin Mitte, the heart of the capital and a very lively neighbourhood with several places to eat and drink. It was pretty close to the train station and the old railway arches have been filled up with many restaurants. I had a nice meal in restaurant Nolle, I ordered a very reasonably priced house dish: schnitzel, sausage and meatballs. This is Germany after all. 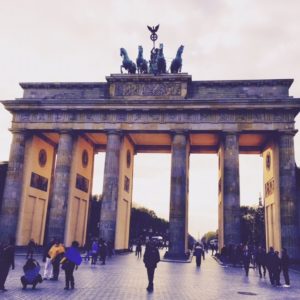 Late at night, I walked up to the Brandenburg Gate for the first time, it would not be the last time. Somehow I felt drawn to this monument, as if I forced myself to think and rethink the value of freedom and peace. Its surrounding Pariser Platz is a quiet cobblestoned pedestrian zone, they banned traffic from the square which allows people to come together and reminisce about the time when thousands celebrated the fall of the Berlin wall back in November 1989. A lot of embassies, like the American and French, are located  nearby, as if to make every visitor recognize their share of peacemaking at the time. Close to the Brandenburg Gate is the Reichstag, seat of the German parliament, and the Holocaust Monument, a memorial for the murdered Jews of Europe. Both are equally impressive be it for different reasons.

The next day started grey and cloudy. I walked the entire 3,3km long Friedrichstrasse up to Checkpoint Charlie, an important former crossing point between East and West Berlin but actually looking rather fake. The outdoor photo gallery with many pictures and stories about daring escapes during the Cold War was of much more value to me than the replica of the border house with guards posing for pictures with tourists. I decided to walk around the Eastern part of Berlin, passed the red-brick Berlin City hall and headed all the way up to Alexander Platz.  In the end, walking is essentially what you do when city tripping, right? Alexander Platz did not make too much of an impression on me. It is Berlin’s largest public square featuring mostly shops and a TV tower which is a great orientation point and undoubtedly provides most splendid but greatly overpriced views over the city. 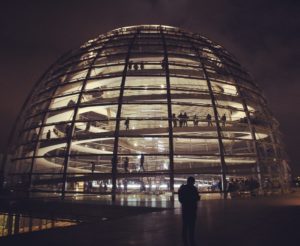 Walking through the Museum island and along the magnificent Unter den linden Boulevard left me utterly amazed. Great buildings and world-renowned museums line up alongside each other. Too bad the weather was dark and gloomy and renovation as well as construction work was going on all over the place. This really blurred the pretty view and definitely prevents every tourist from taking nice pictures. This by the way applies to the whole of Berlin, I have never seen so many cranes per square km anywhere else. Late afternoon I hung out in the area of the Potsdammer Platz, and had a beer in the Sony Centre, masterpiece of innovative architecture and modern technology.

To finish the long day, I signed up for a visit of the Reichstag roof terrace and glass Dom which gives fascinating views of the city and the Brandenburg Gate in particular. It also provides insight in the Bundestag plenary chamber featuring the purple seats and the large eagle as symbol of the Federal German republic. 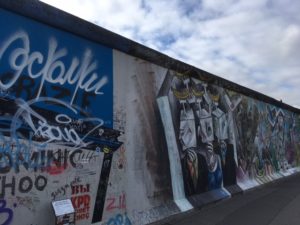 After a good night’s sleep and a very rich breakfast I decided to explore the outskirts of the city by public transport instead of by foot. My feet were killing me actually. Tempelhof in the south is interesting, for the mere fact that this vast piece of land so far has not been commercially developed. Instead people in Berlin come together here for hanging out. Must be fun in summer, not so much in winter. I took the metro line and stopped at Warschauer Strasse to see the remainder of the wall at East side Gallery, which does give you a good impression of what it looked and felt like at the time. Walking around Friedrichshain, I tried very hard to feel the attraction. The many restaurants and abundance of street art gives the area a bohemian atmosphere. I can imagine, in summertime, this is a place you would want to spend your long evenings. In wintertime though this is a raw and somewhat gloomy area, even threatening at some point. Freedom is taken to the outer limit, drinking happens out in the open, on the street. I had a burger in Burgeramt, by the amount of people inside, it must have been the best burger in town although I suspect at least some people primarily want to be seen eating there.

Berlin left me with mixed feelings. It is a magnificent city, full of history you cannot ignore. Buildings and monuments are screaming for attention. You have seen many sites in documentaries on TV, about Hitler or the war. Walking passed these icons of history so many decades later makes you feel quite overwhelmed. But Berlin definitely wants to outgrow its history and be a contemporary, arty hotspot for next generations who will be less interested in its past. I can see the potential but I will need to come back when all work in progress has finished and I have to change the season so I can stroll the many parks and squares and enjoy the ultimate – and mostly fairly cheap – outdoor food and drink experience. I’ll be back.